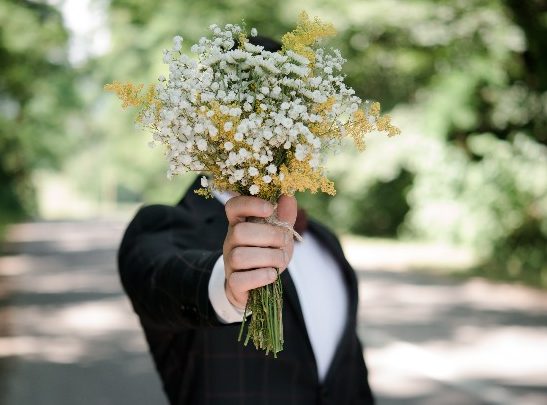 You’ve met a wonderful man, you’re chatting with him, but you’re still unsure if he’s really interested in you? You can’t tell if he’s just looking for friendship or maybe something more?

JUST FRIENDS? OR MAYBE SOMETHING MORE?

The 25 body language giveaways that show whether he is taken with you or not:

Move to look out for: Where is he putting his hands?

Move to look out for: Moving closer to you

Is he leaning towards you as you chat? Then you have a sure-fire sign that he likes you as he is getting physically closer to you so that he is able to listen to you better. If he is leaning towards you then you know for sure that he wants to be as close to you as possible.

3. Move to look out for: Running his hands through his hair

Is your guy running his hands every few seconds through his hair and smiling too? Smash hit! His body language is a telltale indication that you have made him nervous. You seem to be to his liking! Also you can now be certain that he can keep his cool quite well in stressful situations so no need to fear a chronic nail-biter. Professor Samy Molcho explained in a speech on body language during flirting that the “hands through the hair” move should suggest “I am worthy of being showered with affection”.

4. Move to look out for: His body is turned towards you

Keep an eye out for where his body is in relation to you. Is his body turned more towards or away from you? Are his arms crossed and his body leaning in the other direction? Then maybe he isn’t so keen on you. But if his whole body is turned towards you and his arms are relaxed then you can assume he is 100% focused on your conversation and is fascinated by the topic.

Is he intensely holding your gaze and rarely looks away from you as you chat? That suggests genuine interest in you! Eye contact while talking is a watertight way of detecting whether the other person is keen. If, however, he is constantly looking around at other people or is playing on his phone then maybe it would be better to move on and flirt with someone else.

We, of course, don’t mean obscene touching. Does he like to put his arm around you for example? Or does he keep touching your arm or hand quickly? Does he sweep your hair out of your face? Then you have a failsafe sign that he finds you attractive and wants to get physically closer to you.

He welcomes you with a particularly long bear hug and never misses an opportunity throughout the evening to hug you? Maybe he even caresses you lightly on the back while hugging you? Awesome! Body contact is what he’s after.

8. Move to look out for: Taking care of you

Does your dream stud hold the door for you at the restaurant? Does he make sure you’re under the umbrella so that you don’t get wet and lend you his jacket so you don’t get cold? You get the impression he’s a proper gentleman? Then he definitely has your interests at heart and likes you very much. Your wellbeing is his priority.

9. Move to look out for: Wetting his lips

While you talk, does he keep licking his lips? Before he can tell you something exciting, he has to wet his lips first.

10. Move to look out for: Hips are turned to face you

If a man finds a woman attractive, the biological instincts show through, with his hips facing you and sitting with his legs further apart. Is he speaking with someone else but his upper body and hips are still facing you? Then he is interested in your conversation and doesn’t want to turn away from you.

11. Move to look out for: Getting closer

You’re sitting on the same sofa with him leaving only a small amount of space between you? Not only is he next to you, but he is noticeably close to you? He is craving contact with you and feels very comfortable in your company.

12. Move to look out for: Energetic movements

Are his hands flapping enthusiastically as you talk? That’s a great sign! The more interest men show in something, the more their hands come into play. On the other hand, if he is sitting still opposite you not moving at all, then he is not feeling the fire in this moment.

13. Move to look out for: Looking for your reaction

You get the feeling he is looking to you after every joke or every story? Awesome! That suggests he is keen to see your reaction and wants to know what you make of his stories and jokes. Your opinion is important to him.

14. Move to look out for: Hands seeking hands

His hands truly hold a lot of answers. You are sitting at the same table and you notice that he has placed his hands near yours on the table. Or one of his hands is on the chair you’re sitting on. This is a good tell that he is sweet on you. He is seeking physical contact with you but is still uncertain of caressing you.

15. Move to look out for: Clothes fiddling

Whenever you enter a room and look to him you notice that he quickly adjusts his clothes or runs his hands through his hair again. No worries, that doesn’t mean that he will have to go to the hairdressers soon or hasn’t been able to iron his shirt. You can actually be content in the knowledge that he is preening himself to make a good impression and impress you.

Some men subconsciously mimic the woman’s gestures when they are in awe of them. Don’t be put off, therefore, if he starts running his hands through his hair when you have just done so. He isn’t mocking you, rather, he is paying such close attention to you and your behavior that he is unintentionally copying it.

When you’re near him, do you have the feeling he is stretching his body to seem bigger? Men often try to show women their desire with this behaviour to be the ideal protector for the woman. It is common knowledge that women are often drawn to more protective men.

18. Move to look out for: Touching his face

As you talk with him, he often touches his chin or cheek. That, too, is a good sign. It shows he is concentrating on remembering and noticing what you’ve said. These gestures help him remember what you’re telling him.

You’re in the same room but haven’t had the chance to chat yet. Every time you look over, you notice he is looking at you, even staring, then looks away quickly. He is totally crazy about you! He likes looking at you and wants to know what you’re doing, with whom you’re talking etc. It is also clear that he is quite shy and therefore avoids eye contact still.

20. Move to look out for: Sticking his chest out

Subconsciously, he wants to impress you with his body and is therefore trying to give off a manly, self-assured impression in order to stand out from the crowd.

21. Move to look out for: Twitching eyebrows

When an attractive woman enters their sights, men often have a habit of raising their eyebrows. So check out his eyebrows and of course also his facial expressions in general.

22. Move to look out for: Laughing

Obviously your dreamboat is good-tempered and has a happy way about him. However, you still get the feeling he laughs even more when with you. Not just at your jokes but also generally. That’s a big thumbs up! Men laugh more when they are around people with whom they feel comfortable.

23. Move to look out for: Comparing hand size

Often overlooked but nonetheless important, by comparing the size of your hands he has found the easiest way to have physical contact with you. What’s more, he thereby shows you that he has large, strong hands to protect you with. It is also possible that he will caress your hand more often or hold your hand afterwards.

24. Move to look out for: Behavior with other women

If a guy acts like a gentleman around you and openly flirts with you then that’s awesome. Take note, though, of whether he is the same with other women. If this is the case, then it suggests he finds other women just as great as you. Be careful not to over-analyse such behavior though and don’t be disappointed afterwards.

25. Move to look out for: Contradictory behaviour

1 thought on “Male body language: How to spot when a guy is interested in you”